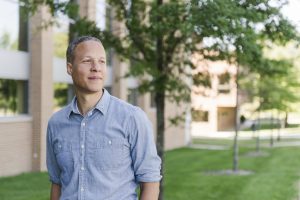 Professor Musgrove teaches courses in Post-WWII United States History with an emphasis on African American politics. He is the author of Rumor, Repression, and Racial Politics: How the Harassment of Black Elected Officials Shaped Post-Civil Rights America (U. of Georgia, 2012), and co-author, with Chris Myers Asch, of Chocolate City, A History of Race and Democracy in the Nation’s Capital (UNC, 2017). In 2021, he released blackpowerindc.umbc.edu, a web-based map of Black Power activism in the nation’s capital between 1961 and 1998. His work has appeared in the Washington Post, National Public Radio, the New York Times and The Root. He is currently working on “We must take to the streets again”: The Black Power Resurgence in Conservative America, 1980-97, which explores the burst of black activism that rose in opposition to the urban crisis and the conservative retrenchment. He earned his Ph.D. from New York University in 2005 and  lives with his wife and two sons in Washington, D.C.